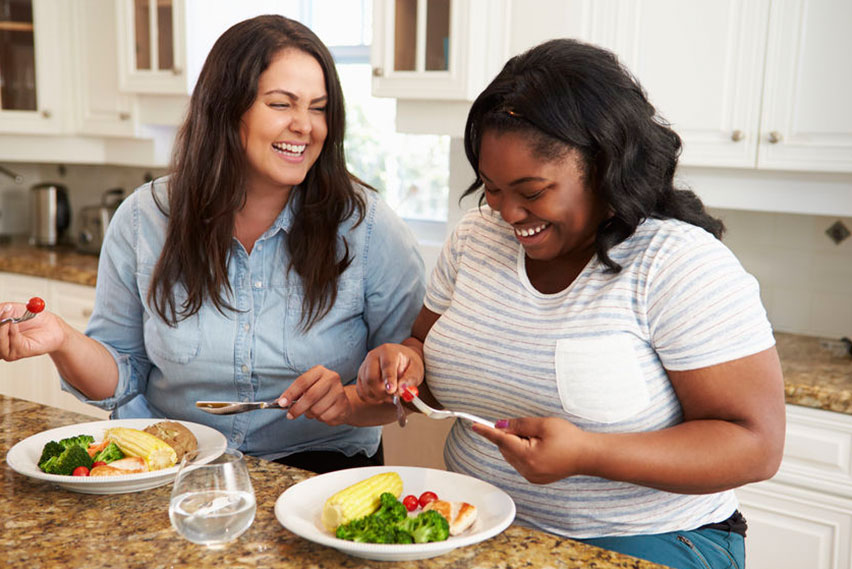 Can Obesity Be Reversed By Eating More?

Kevin, a forty-five-year-old software engineer from California, almost had it all.

He’s been married to his wife Kelly for nearly twenty years now, and they’re crazy in love with each other.

His son Daniel, 14, has a promising future in his favorite sport, archery. He’s been winning local tournaments left and right, and it looks like he’s headed for a college scholarship with the way things are going.

His other boy, Zachary, is a genius at the piano. Even at eight years old, he’s outplaying other kids nearly twice his age.

For all intents and purposes, everything was going great – except for one thing.

“I used to be to be fairly athletic in high school and college, but things changed when I got married and started working,” Kevin said.

After he got older, he found less and less time for staying fit – and his sedentary job didn’t help, either.

Kevin was 150 pounds when he first got married. By the time Zach was born, he hit 220 pounds.

Things were not looking good. He needed to take medication for his inflammation and high blood pressure.

Kevin also got tired frequently, causing him to nod off at work. And when he got diagnosed with stage 1 hypertension, Kevin knew he had to take action.

“My family has a history of heart disease, and my grandfather died when my dad was 10,” Kevin shared. So he didn’t want to follow in his granddad’s footsteps, as far as his health was concerned.

At first, Kevin tried reducing his portions and changing his food choices. Unfortunately, the “low fat” and “sugar-free” snacks he replaced it with made the problem worse.

“I thought that cutting calories would help me, but I put on even more weight,” he said.

That was when he got a trainer involved. To Kevin’s surprise, Matt gave him the opposite advice you’d hear from most people in his line of work.

Matt said that the “lite” stuff he was substituting his old food with was actually loaded with sugar.

So instead of reducing his calories, Matt’s plan was to increase his intake a bit more.

However, they were going to overhaul Kevin’s diet. He’d usually eat processed foods that were high in sugar and saturated fat.

So instead, he switched to whole, unprocessed foods.

They might have had the same (or even more) calories, but this time they counted.

By getting the micro and macronutrients his body needed, Kevin eventually was able to sustain himself throughout the day.

Thanks to the natural sources of slow-burning energy he consumed, his blood sugar levels stopped spiking.

As a result, Kevin experienced a good level of satiety – his cravings went away and stopped overeating.

He also stopped nodding off at work during the day.

Matt also put him on a fitness routine which consisted of aqua jogging, strength training, walking and a little bit of weight training.

In time, Kevin was in good enough shape to play basketball again without having to catch his breath.

And in less than eight months, Kevin managed to shed close to sixty pounds.

“After I started eating real food and worked on using those calories, things changed drastically.”

Kevin is one of the millions struggling with obesity. But with effort and proper planning, he gradually turned the tide in his favor.

However, it’s not the same story for others in a similar situation.

Those are alarming numbers, considering the fact that obesity is the gateway to many other scary diseases.

It’s clear that keeping those extra pounds is pretty much like playing Russian roulette with your health. And the only way to stop playing that deadly game is by turning fat into useful energy.

The problem starts when your body starts producing too much insulin, an energy-regulating hormone.

Ideally, you should only have enough insulin to transfer sugar from your bloodstream into your cells, muscles and liver.

But consuming too much sugar creates a surplus of energy, and that’s when things go haywire.

Unlike whole foods, processed food and refined sugar don’t come with the built-in feature that tells your body to stop eating.

So when you eat past your natural satiety point, your body gets crammed with extra sugar and energy.

Then you’ll end up transforming that excess energy into fat, which of course, is not a good thing.

And to make matters worse, your metabolic system will become dependent on sugar for energy. So your body will basically ignore fat and not burn it.

Meanwhile, your cells start to resist the effects of insulin, leading to a condition called insulin resistance.

Like the rest of your body, your cells are now drowning in excess energy from too much sugar.

So they’ll shut themselves off in an attempt to stop taking in any more sugar or other nutrients. Unfortunately, this only perpetuates the cycle.

The pancreas will then try even harder to produce more insulin. The longer this goes on, the more damaged your cells become.

This puts on you on the path to long-term diseases. This scenario is years in the making, so undoing it will take some work.

But the key takeaway here is that it’s not about reducing your calories – it’s making them COUNT.

When you wrap whole, healthy foods around those calories…

…then you prevent high blood sugar levels and insulin resistance…

… along with cell damage and obesity.

Investing your health in the right food

One of the key principles of the eat-more-to-lose-weight approach is to rethink your reasons for eating.

It’s vital to know that obesity starts with eating purely for the pleasure of it.

When you make your food choices based on how stimulating it is, you’ll develop the habit of reaching for a bag of chips or Oreos every time.

Instead, your priority should be to fuel yourself with REAL meals that satisfy you on a deep, nutritional level.

This is the only true way to avoid the craving for processed, over-stimulating food.

Remember, food companies design their products to be ADDICTIVE, not nutritious.

As such, your first goal is to purge sugar from your diet.

As you just learned about insulin, you’re courting disaster by eating foods with nothing more than empty calories and sugar.

The United States Department of Agriculture (USDA) says that the average American consumes about 170 pounds of sugar in a year.

At that rate, it’s no wonder obesity rates are skyrocketing.

Sugar is lurking in a lot of products – even those marketed as “healthy”, “diet”, “lite” and “low fat.”

Avoid these at all costs – and clear your refrigerator and pantry of these foods while you’re at it.

Next, shop only for whole, unprocessed food sources like quality meats, eggs and dairy. The same goes for vegetables, fruits, nuts, seeds and herbs.

These will give you need the vitamins, minerals and other nutrients to help you lose weight safely.

For instance, plant-based compounds found in vegetables have antioxidant qualities. Our cells undergo oxidation, and too much of this causes cell damage – and eventually, cancer.

As such, the right food can help reverse this damage.

Whole food also contains essential stuff like carbohydrates, protein and fats which usually needs to be consumed in larger quantities.

Protein is essentially a string of amino acids which help build muscle tissue and brain matter.

Fats are also vital for brain function, as well as carrying nutrients between your cells. They’re also helpful in breaking down certain vitamins and support your immune system.

And like we talked about, they’re also an energy source which you should be using (instead of just sugar).

Which brings us to the next point…

High-quality foods leave you more satisfied. Plus, they eliminate the need to skip meals which will only backfire in the long run.

Starving yourself now leads to disastrous food choices later. It’s much better to eat balanced meals on a consistent schedule.

…only then can your body can do its job and BURN FAT.

If you’re not running on the right fuel or starve yourself, your body will enter a state of starvation.

And when this happens, it will start targeting your muscle, causing you to lose mass.

With less muscle mass, you’ll have an even harder time losing your weight in body fat.

According to a study by the American Physiological Society, you need enough calories and protein to maintain muscle tone.

And more muscle equals more calories burned. With the right foods, you can rewire your metabolism to burn fat instead of sugar.

How do I get started?

The first step is to calculate your specific resting metabolic rate. This varies for each person, so what you do is multiply your current weight by ten.

For example, someone at 200 pounds will have a resting metabolic rate of 2000. This number translates to the minimum number of calories they need to function on a basic level.

And when you add the calories required for going about a typical day and working out, it comes to about 2500 calories.

Thus, this person would need between 2000-2500 calories in a day to lose weight.

Going BELOW this figure will make them harder to do so (and quite possibly go into starvation mode).

The next step is to distribute these calories equally in a typical day. Eating balanced meals every 3-5 hours will give you enough energy throughout the day without crashing or overeating.

As for what to eat, it would take a whole book to discuss that in detail. But like we covered earlier, the baseline standard would be foods that are fiber-packed, nutrient-dense and contain healthy dietary fats and protein.

Once you’ve got these essential nutrients in your corner, you’ll be unstoppable.

Please bear in mind that you should always consult with a professional before making any major changes to your nutrition.

Always get your physician, nutritionist and trainer involved. They can include other factors like age, genetics and other variables that will impact your resting metabolic rate.

Once you get your body accustomed to a new way of eating, you’ll enter a healthier cycle.

You’ll do away with feeling deprived and low energy levels. And beyond that, you’ll change the way you look at food.

The habit of eating stops being a recreational activity. Instead, food becomes a means for you to keep yourself energized and happy, allowing you to do the things you love.

That’s not to say you shouldn’t love eating. However, shifting most of your focus on nutrition will greatly improveyour life.

What you eat has a powerful effect on your life. It can, quite literally, lengthen or SHORTEN it.

…and which ones put you on the fast lane to life-threatening illness.

Here’s an eye-opening documentary series that will give you the pieces of the puzzle that make up Food, Health and You: